Ep 7b
Shiro (シロShiro), Lucky in the Vitello, Phuuz and Dutch dubs, and Whitey in the Funimation and LUK Internacional dubs, is a white (Shiro means white) pup Shin-chan found in a cardboard box in episode 7b (I found a Puppy). While he is a beloved member of the family, he is the subject of neglect thanks to his owner's forgetfulness and short attention-span. He is a very intelligent dog, often presenting logic and intellect that surpasses his human owners. As his meals from the Noharas are at best inconsistent and at worst far-in-between, he has developed a venerable talent for foraging and scavenging to survive days without meals. An oddly human-like dog, he is very responsible and painstakingly careful. He saves the world under the superhero moniker of Super Shiro[1].

He is very beloved to Shin-chan, but Shin-chan often teases, mocks and forgets him. His doghouse also often ends up becoming a place for Shin-chan to hide himself or something he doesn't want his family to find. Shiro often plays protector to Himawari, more often than not sacrificing his well-being in the process. In SPECIAL 53 it is discovered that Shiro and Shin-chan are born in the same year, which means that they are both 5 years old.

He looks a lot like cotton candy (quote of Shin-chan upon leaving Shiro in a stranger's care for a few moments: "he looks like cotton candy, but don't eat him"). Shin-chan has gotten some laughs out of the poor puppy by putting cold masks on him. He has taught Shiro two tricks: "kai-kai chinchin" where in Shiro scratches himself, and "wata-ame seijin" ('cotton-candy alien') when Shiro curls up like a big ball of cotton candy and rolls around.

His original owner is Run.

Shiro is a very intelligent dog, often presenting logic and intellect that surpasses his human owners. He can walk himself when Shinnosuke refuses to do so. He knows how to perform for and get food from the people in the shopping street. He also knows how to take care of Himawari when they are by themselves.

When the Nohara family have to bring him into places that don't allow pets, such as train and airplane, he would pretend to be a stuffed animal so he can travel with the family.

He is also good in way-finding. In Crayon Shin-chan: Pursuit of the Balls of Darkness, he was left alone in the train but managed to walk all the way from Tokyo back to Kasukabe. 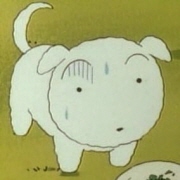 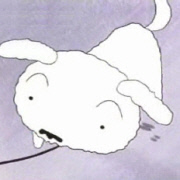 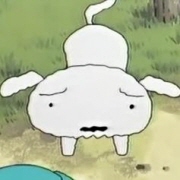 Shiro in the manga.

Shiro and his girlfriend are blushing. 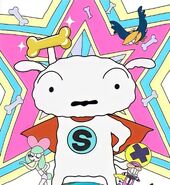