Ep 1-c
Nene Sakurada (Neni) (桜田ネネ) (5 years old), also known as Penny in the Funimation dub and Nini in the Vitello, Phuuz and Dutch dubs, is one of Shin-chan's classmates and friends from the sunflower class.

She loves to play "real omamagoto" ("real house") in which divorces and arguments are very common and she typically forces/blackmails the boys to play with her. She insists on being the mom all the time-and she forces her friends to do stuff they don't really want to do. This is always a nuisance to Shin-chan, Bo-chan, and Kazama-kun and a nightmare to Masao as he often needs to be Nene's husband (as an unsuccessful salaryman) in the plot. She occasionally sees her mother go crazy or do something out of character which shrieks Nene to say something literally translated to be "you're not my usual mom!".

Nene styles herself as a sweet girl, but in fact she has inherited her mother's temper and is quite bossy. Like her mother, she hits a stuffed bunny to relieve her anger. Alternatively, Nene uses Masao as the lightning rod for her frustration when her bunny is not available. She considers Ai Suotome her rival and can't stand it when boys prefer Ai-chan to her. She has many pet cats which she loves a lot and she likes to watch the TV Magical Girl Moe-P. She is a member of the Kasukabe Defense Organization.

He is the closest best friend for Nene, spends the most time together and have the most shippers compared to the other 3 boys. Some fans said she has a crush on Shin-chan. She likes to play real-house with the other members in the Kasukabe Defense Organization which is 4 male best friends and because of this Shin-Chan and his friends always want to escape from her. Nene is impatient with Shin's odd behavior but does enjoy his company, as she usually invites him (if he hasn't already invited himself) to join her and her mother if they're out for a meal (much to her mother's dismay). In the movie My Moving Story! Cactus Large Attack! Nene was upset when she hears Shin Chan is going to move to Mexico, proving that she does care about him. Although she has a habit of losing her temper, she still makes a good team with Shin Chan. They both are very match. Sometimes, Nene give Shinchan her husband's role and characters when they played 'real house' which is her favourite game. Nene always give Masao her husband's role and characters. If not Masao, she will give Shin-chan. Besides Shin-chan's mother, Misae, Nene is the only girl who can control him and beat him. He is scared of her too. There's another boy name Motohisa who likes Nene and always fights with Shin-chan. Whoever wins get to be with Nene. They fights for Nene in a few episodes. Same thing, when other girls example Ai wants to be with Shinchan, Nene won't let and fights with them. They fights for Shinchan in a few episodes too. They both sometimes bully (but not in a bad way) and scold Masao which made him cry while Kazama and Bo comforted him when he cries.

After Shin-chan, he is the closest best friend for Nene, spends the most time together and have the most shippers after Shin-chan and Nene couple. When they split up, they are usually seen together. Nene always give Masao her weak husband's role and characters. Masao is scared of her too. In the movie 2004, they 5 enters a movie and start a new life there, forgetting everything. Masao and Nene are husband and wife there. Nene, along with Shin-chan, sometimes bully (but not in a bad way) and scold Masao which made him cry.

They are good friends too. Both of them understand and always support each other 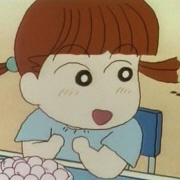 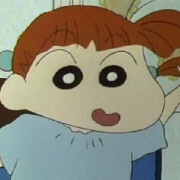 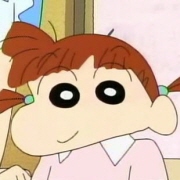 Her house
Community content is available under CC-BY-SA unless otherwise noted.
Advertisement