Moeko Sakurada (桜田もえ子), Patty Milfer in the Funimation dub and Ruby in the Vitello, Phuuz and Dutch dubs, is Nene-chan's 31 year old mother. She is easily irritated by Shin-chan, whom she despises, and Misae because she always seems to rub her the wrong way whenever they meet. She has a very strange way of expressing her anger; she beats up a very large stuffed rabbit when in private. Her psychologically-questionable behavior is sometimes seen by others (including her daughter Nene-chan), and those who see her have sweat drops on their head (including the abused stuffed rabbit) and are very intimidated by it (except, of course, for Shin-chan). When she's not angry, she looks like a normal person. Her abusive actions towards stuffed rabbits was passed down from her mother, which she passed down to her child, Nene-chan.

Although Nene-chan might be immune to Shin-chan's shenanigans, her mother is a entirely different story. The few encounters that she has had with Shin-chan has left a rather deep impression on her -- somewhat like the impression that a sledgehammer would make. To give her some credit, she makes a superhuman effort to retain her composure whenever Shin-chan is around. This goes as far as to politely excuse herself, go to another room, and beat the stuffing out of a teady bear. Unfortunately, venting her rage in this manner is almost completely useless when Shin-chan is concerned. She has lost complete control on more than one occasion and if the more recent times that she has lost control are any indication, she'll probably make some psychiatrist a very rich person. From what little has been seen of her husband, he doesn't appear to be in much better shape (plus he is terrified of bugs).

In the LUK Internacional dub she has a British accent.

Moeko in the manga

Moeko and her husband. 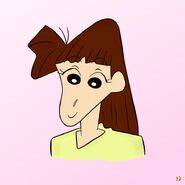