Misae Nohara (née Koyama) (野原みさえ), Mitsy Nohara in the Vitello, Phuuz and Dutch dubs, is the mother of the Nohara family, and its caretaker. She is 29 years old but she always tells people that she is 24 or 25. She is the classical housewife of post-war Japan - she cleans, launders, cooks, sews, mothers, and lazes all to varying degrees of success. A paragon of hypocrisy, after handing out irrevocable edicts to her husband and children (mainly Shinnosuke), she will not hesitate to immediately break them once they are out of sight and has even been known to display double standards while in their company. Her famous and symbolic moves includes "drilling" others' head with her fists (known in Japanese as the "Guri-Guri Attack" (グリグリ攻撃 Guri-Guri Kōgeki)) and one or more punches to the head (sometimes shown through a "Genkotsu Scene" (げんこつシーン Genkotsu Shīn), a scene where animated "Genkotsu" (げんこつ) text covers the screen as Misae commits the act), creating comically large lumps. The punches are mainly thrown by Misae, but other characters have been known to use it as well, like Hiroshi and Nene.

While she spends as little as possible on the less-essential needs of her husband and son, she loves to splurge on Himawari and herself. She always changes her hair style, as seen it is sometimes curly and sometimes long and shattered hair.

She is the source of boundless diet and savings plans, all of which fail within the first week. For example, she is prone to immediately partake in bargain sales when she sees them, thinking she is saving the family money. However, she buys in extreme quantities, which defeats the purpose.

She takes care of her household; tends to her husband and child when they're sick; rides Shin-chan to school when he misses the bus (which is most of the time); takes an umbrella out to her husband when it's raining; cleans, shops, and otherwise works like a dog. In the morning she struggles to get Shin-chan in time for the school bus, so usually she ends up riding him on a bicycle. This motivated her to learn to drive, but she tends to scratch the car when she parks it and have small accidents, although this is usually because her child distracts her on purpose. Misae tends to bring Shin-chan just about everywhere, probably because leaving him home alone usually results in some sort of household catastrophe. However, excursions with mom just mean ample opportunities to be embarrassed (and Shin-chan usually requests compensation in the form of action figures or Chocobi snacks). Occasionally, she tries playing pretend or acting in a fun-kid sort of way to get Shin-chan to be a bit more enthusiastic - for example, when the Noharas went fishing, Misae started talking excitedly (for Shin-chan's benefit) about the possibility of catching mermaids and being led to their secret castles. "Geez, mom," Shin-chan replied with a snort, "act your age".

Most of her luxury purchases, however, often end up broken, misused or otherwise ruined by her children, sometimes even before she had a chance to try them. Additionally she secretly hoards money for her own personal use. She is also known to be a terrible driver. Misae also constantly checks Shin-chan's and Hiroshi's behavior around young women and punishes them accordingly (and always seems to be in the right place at the right time when it comes to the latter). She loves telephoning, shopping and going out doors with her friend Keiko Honda. 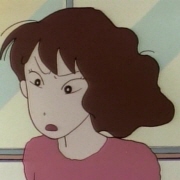 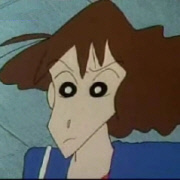 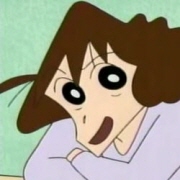 'I've been waiting for those words forever! You've become a good boy, Shin-chan!'.

Misae with Shin-chan just after birth