Mimiko Sakura (桜 ミミ子 Sakura Mimiko), Loli Pop in the English Funimation dub, is Action Mask's ally. She provides Action Mask with weapons and information, though she more often than not gets herself captured in the process. She has a twin sister named Ririko (リリ子), lookalike her, in Crayon Shin-chan: Action Mask vs. Leotard Devil.

In the spin-off manga, Mimiko is an adult working as Professor Kitakasukabe's assistant, monitoring Gō's progress.

In one of the SPECIALS, it is revealed that Mimiko is the younger sister of Eagle Head, a member of the Sparrow Groupy who has often tried to destroy Action Mask and dominate the Earth.

Weirdly, she gained her own powers and was able to transform to a form resembling sailor moon,dubbed sailor mimiko later in series, she also gained a sailor v like mask. Also, her lookalike [1]Fumie got 30 marks in her test, exactly what usagi got in the first episode. 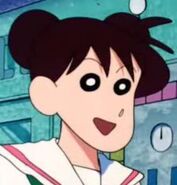