Masumi Ageo (上尾ますみ), Miss Agnes in the Vitello, Phuuz and Dutch dubs, and Ms. Polly in the English Funimation dub, is a relatively new 23 year old teacher who handles the Tulip class. She seems to be nervous of everything and experiences panic attacks when facing a large group of kids (which is an everyday scenario of a kindergarten teacher). However, when Shin-chan takes off her glasses, her vision becomes blurred and a personality change takes place; she becomes very aggressive and fearless as shown in her first appearance in episode 281b "The New Teacher Acts Weird" (新しい先生は変わってるゾ). Her condition is somewhat similar to Launch from the Dragon Ball series.

She has a fixation with Kuroiso, but the motivation behind it changes between the manga and the anime from one of admiration to one of romance. Throughout the series she becomes more "extroverted" without fully reaching what that term implies. 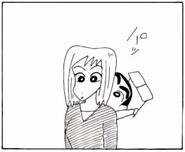 In the manga without glasses.

Community content is available under CC-BY-SA unless otherwise noted.