Masae Koyama (小山 まさえ), Minnie in the Vitello, Phuuz and Dutch dubs, is Misae's older sister. She is 35 years old and still single. Her first appearance took place in episode 130a. She lives in Kumamoto (Japan), so her appearances on the show are rare. She shares some of the same mischievous antics as Shin-chan and Ginnosuke, though it is possible that Misae learned some of her moves from her. She likes to tease Misae. She teaches Japanese language at an institute. 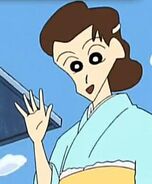 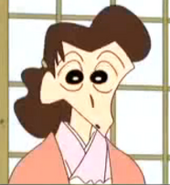 Masae disguised in a mask when she visited the Noharas.

Misae, Masae and Musae
Add a photo to this gallery
Retrieved from "https://crayonshinchan.fandom.com/wiki/Masae_Koyama?oldid=19251"
Community content is available under CC-BY-SA unless otherwise noted.