Keiko Honda (本田ケイコ), Kei is her nickname, has been Misae's good friend since middle school. She is 29 years old. Her nickname is "Okei", so Shin-chan calls her "Okei-obasan" (Aunt Okei). She married Satoshi, who is 7 years younger, in episode 56-2 (結婚式に出席するゾ). She gave birth to Hitoshi, because of her being pregnant she moved to a new house. Her maiden name is Mogamigawa (最上川ケイコ). She has a niece and she likes to go shopping with Misae.

Being Misae's closest friend gives her the "enviable" role of being Shin-chan's "aunt". In fact, Keiko and Misae are so close that at times it might seem as if they were related. Being so close also has its disadvantages. She is often recruited to babysit Shin-chan. Because of her age, she likes to have Shin-chan call her oneesan (big sister) but Shin-chan calls her 'obasan' instead. Obasan is translated as 'aunt' but the word also has other connotations. Namely, old lady. While she finds being called obasan somewhat annoying, up to this point, she's been unusually forgiving of just about everything that Shin-chan has done. The fact that she's hasn't responded with any sort of physical retribution make it hard to understand just how she could be such close friends with a person so different in temperament like Misae (aka The Physical Embodiment of Vengeance).

Keiko's also a newlywed and loves her husband. Although her husband is apparently very successful and is also what her older sister Misae refers to as a "hunk", he is not without his "idiosyncrasies". Her tolerant nature seems to allow her to overlook them but her ability to do this can't be easily dismissed because of her husband's secret, to put it bluntly, is that he's a giant anime fan. 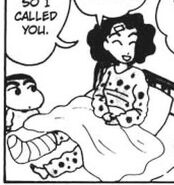