Kōsuke Minamijima (南島 こうすけ) is 5 year old and goes to the Rose class. He appeared only once, in the 45th Volume of the manga and later in episode 605b (夏といえば水泳大会だゾ).

He is an expert swimmer and took part in a swimming competition between the Sunflower class and the Rose class. He was the last relay swimmer for his class, but he could not beat an ultra-motivated Ai Suotome, who whas doing her bet to impress Shinnosuke. Despite losing, he says he is excited, as he just swims for fun, not for winning or losing.

The character is based on the Olympic swimmer Kōsuke Kitajima (北島 康介), who has won a total of 7 olympic medals. His speciality is breaststroke (four golds), and its anime character is seen swimming in this style opposing the rest, who swim freestyle. 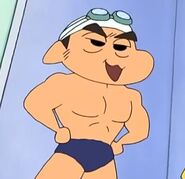