Hiroshi Nohara (野原ひろし) (35 years old), Harry Nohara in the Vitello, Phuuz and Dutch dubs, is the father of the Nohara family, and its sole source of income as he works at as kakarichô (a low-level manager) at Futaba Shoji where he does overtime to earn a little more money and because of the 32-year mortgage he still has to pay. Quite surprisingly he still manages to have time to spend with his family. Hiroshi met Misae Koyama when he was 29 and married her soon after. Soon, they had Shinnosuke.

He is a loving father to his two children, and ultimately a devoted husband. While he is the family breadwinner, he hands the reins of finance over to his wife, who maintains a totalitarian level of control on family spending. He is a stereotypical Japanese salaryman, working eight-hour days, enduring overstuffed trains, enjoying the occasional nightlife, and giving every bit of his take-home pay to his wife every month. He is a quiet, reasonable person who is almost always invited by his boss or a worker to drink beers - where he almost always gets drunk.

He used to smoke a lot, when Misae was pregnant by Himawari, he quit smoking as a favor for her. He was born in Omagari, Akita (a village in Daisen, Akita), and has an older brother and niece.

In the year 2020 Hiro was featured in a real-life coffee commercial for the brand Craft Boss.

Hiroshi and his son both like to watch and flirt with pretty young ladies which ends up getting punished by his wife.

He always bickers with his wife over little things but he still loves his wife, no matter what.

Shin-chan probably has inherited a habit from Hiroshi, who ogles pretty young things just as often as his son (and is chastised by Misae just as often, too). However, he is faithful to his wife, but only when awake: his dreams often deal with an office romance (and are usually rudely interrupted by Shin-chan's antics).

Where Misae is the stern disciplinarian, Hiroshi barely lays a hand on his son to reprimand him, but rather attempts to defuse Misae's temper with a few "maa, maa"s ("Now, now...") now and again. When Misae asks him to properly scold Shin-chan, Hiroshi tends to just sit down with the boy and tell him (tiredly) to shape up. He's also able to convince Shin-chan to go places he would normally not want to go by telling him about the beautiful women who are bound to be there, although this tends to incur his wife's wrath.

His weak point, besides from being roasted by his son, is his smelly socks, which are often used to wake up, threaten, and/or punish any member of the family, including the dog.

He calls Misae by her first name. Hiroshi generally sets a good example for Shin-chan, rarely coming home drunk and hardly ever using violence. Since Hiroshi rarely comes home late, the Noharas can usually eat dinner together, whether at home or at a restaurant. Even dining at fancier restaurants is a family affair. Misae and Hiroshi do have their arguments, but they always, always kiss and make up. When Hiroshi was asked to take a month-long business trip to Osaka, he wept at the thought of leaving his wife and son.

Mr. and mrs. Nohara have never gone anywhere without their son. When Misae won a trip to Guam, the entire Nohara family went; they go to zoos, spas, art museums and baseball games as a family. Perhaps this is becoming more common in Japan nowadays, but certainly the stereotypical image is of the dad too busy with work or too tired of it to do anything with the family when he is home due to extended overtime and group-building company activities. Then again, the story wouldn't be as fun if the main rabble-rousing character weren't in it. 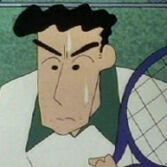 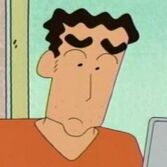 Hiroshi's shoes have a dirty smell.