Ginnosuke Nohara (野原銀の介), Gary in the Vitello, Phuuz and Dutch dubs, is the father of Semashi Nohara and Hiroshi Nohara who is 65 years old. Like his son and his grandson, Shin-chan, he enjoys looking at pretty young women. He also likes to do weird things with his grandson and has taught him many of his habits. His appearance in the show is relatively more common than other minor characters. As with Shin-chan, he is affectionately called Gin-chan. When he visits the Noharas (usually alone), he always stays for much longer than his daughter-in-law Misae would like, leading to friction between the two. He greets the family in various strange (and often embarrassing) ways whenever they visit Akita (where Ginnosuke and his wife life), such as dressing as various movie characters. Another running gag in the series is that whenever he announces to the family that he would visit them (either by phone or post), then he suddenly appears out of nowhere immediately, shocking the family. His wife is Tsuru Nohara. He has a very bad relationship with his daughter-in-law's father Yoshiji Koyama. 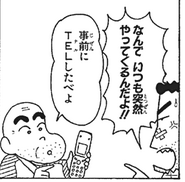 Add a photo to this gallery
Retrieved from "https://crayonshinchan.fandom.com/wiki/Ginnosuke_Nohara?oldid=18058"
Community content is available under CC-BY-SA unless otherwise noted.