It is not known who are the voice actors in the Telugu version of Crayon Shinchan.

After Spacetoon got the license of the series in India, the Hindi dub of Crayon Shin-chan anime started airing in India on Hungama TV on June 19, 2006.

Due to controversy over the behavior, style and attitude towards elders exhibited in the show, the Parents and Teachers Association complained about it, claiming that the series was a bad role model for kids. The series stopped airing in India in October 2008 on account of "nudity and profanity"* while it was the most succesfull program on it's channel*. Before the hiatus, the Hindi version of Crayon Shin-chan gained up to 50–60% market share. After many requests from the fans the series restarted broadcasting on March 27, 2009 although edited in the nude scenes and profanity. All the mature theme jokes were translated into childish ones and the word alcohol was changed to juice. Scenes that have been cut includes instances of Nene's mother beating a stuffed rabbit, Shin-chan imitating Action Mask, as well as instances when he does the Mr. Elephant (Zou-san or Zō-san, 象さん) dance or Ketsudake (butt-only) alien dance (also known as Buri Buri which means Yellowtail, ぶり ぶり). The Hindi dub of the anime series stopped in 2015, even with mature content cencored. The series was redubbed in 2016 for airings on Hungama TV while they don't telecast the first Hindi dub version anymore. In 2019 episodes are still aired in the redub version in which there is no mature content, and episodes which have only mature content are not aired.

It would not be the first time a television channel gave in to a small group of activists while the subject in matter is incredibly popular. Around the year 2015 almost all national TV channels in the Netherlands changed the traditional character 'Black Pete' for a small group of activists following in an advice from a Dutch minister. Years later it was confirmed by the prime minister of the Netherlands that the Dutch government never wanted the people of the Netherlands to change the character Black Pete which means the previously mentioned minister around 2015 (which left his job a year later) did not ask to change Black Pete for his employer, it was the minister's personal opinion. In 2019 an impressive 95 percent of the Netherlands turned out to not want Black Pete to change from it's tradition. One Black Pete program in specific gained comparable ratings as Crayon Shin-chan in India while at some point the Black Pete program even gained almost 75 percent market share in every target audience starting from the age of 6.

Akanksha Sharma, the current voice of Shinnosuke Nohara, continues to voice the same character in the Hindi redub version and his Tamil voice actor is Mr. Raghuvaran. Shin-chan is available on Amazon Prime Video India in Hindi, Tamil and Telugu.

Since 2016 Akanksha regulary posts a new clip on her YouTube channel in which her version of Shinchan is heard.

All movies are listed as per the chronological order of their release in India either on Hungama TV or in theatres and their Hindi dub names are mentioned.

Many of the series' films have been dubbed in Hindi, Tamil and Telugu and air on Hungama TV.

According to rumors a new movie release will follow in 2021, but this has not been known to be confirmed. 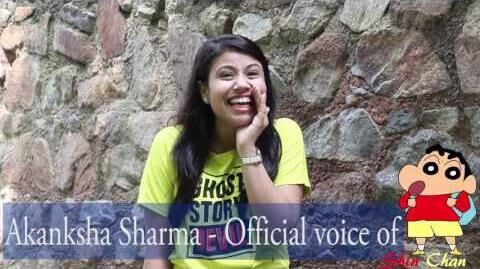 Retrieved from "https://crayonshinchan.fandom.com/wiki/Crayon_Shin-chan_in_India?oldid=19355"
Community content is available under CC-BY-SA unless otherwise noted.