Action Mask (Action Kamen - Japanese, Masked Muchacho - Vitello and Phuuz, Gemaskerde Muchacho - Dutch, Action Bastard - Funimation) (アクション仮面 Akushon Kamen) is the protagonist of a TV series with the same name within Crayon Shin-chan. The actor who plays him is Gotarō Gō, Action Mask's alter ego. When not engaged in saving the world, he is a movie stuntman. In the anime it is explained that when he was about to die, a scientist using an advanced technology provided superpowers, in the title song of the series is said that he "comes from the stars, to protect peace on earth". Shinchan stated that he hopes to be Action Kamen when he grows up. The word "Kamen" (Mask) is a reference to the popular Japanese television series Kamen Rider. Action Mask comes from the "Action Planet" (アクション星 Akushon Sei).

In the manga, Action Mask gave Shin-chan an autograph which he didn't put on a piece of paper. Action Mask's evil nemesis is Meke Meke who embodies all that is evil which just happens to include smoking cigarettes. A cigarette seems to be a permanent fixture on Meke Meke. He even has one firmly clenched between his teeth during the fast and frenzied fights with Action Mask. The techniques that Action Mask uses against evil-doers include "Action Beam!" and "Action Beam Ball!". Unfortunately, Shin-chan's attempts to duplicate these techniques on his mother haven't been quite as successful.

Mimiko Sakura is Action Mask's ally as well as Professor Kitakasukabe. His goal is to defend humanity, although this usually means rescuing Mimiko, who has been kidnapped by different villains who try to use her as bait to end Action Mask's heroism.

His biggest sign of identity is his particular laughter that Shinchan imitates many times. It is done by raising either of the two arms (more frequently the right) pointing to the sky and laughing with the face looking towards where it points the hand of the raised arm. He also has another sign, which is the "A" on his belt. 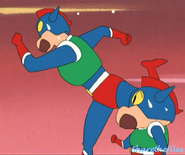